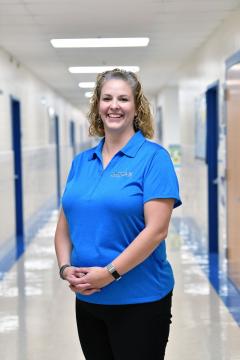 Mrs. Cook, a Fairfax County native, and Chantilly High School alum, is currently the Academy Administrator at the Fairfax Academy for Communications and the Arts, after directing the dance program for nine years.  She graduated Magna Cum Laude with a BFA in Dance Performance from Point Park University and received her M.Ed in Administration and Supervision from the University of Virginia. During Mrs. Cook’s time in New York City, she danced with PushFactor Dance Company and as a founding member of Undertoe Dance Project, worked for Steps on Broadway, the New York International Ballet Competition, and taught dance classes at the New York Kids Club.  She served on the faculty of and was a judge for, DanzJam Conventions in the New England area.  Her work has been featured in numerous companies and as part of choreography festivals in Pittsburgh, New York City, and the Washington, D.C. area, in addition to local theatre companies and high schools. She has had the privilege of working with dancers at various pre-professional companies, including setting both ballet and contemporary works.

During her time as the Academy Dance Director, she received numerous grants including the prestigious Wolftrap Foundation Scholarship Award which enabled the Academy dancers to learn and perform Aureole and 3 Epitaphs by the prolific American modern dance pioneer, Paul Taylor. In her spare time, Mrs. Cook serves on the Steering Committee of the NCA Cappies where she also is the Gala Choreographer, is the University Supervisor at James Madison University for aspiring dance teachers, and is a member of the Fairfax Spotlight on the Arts Steering Committee.