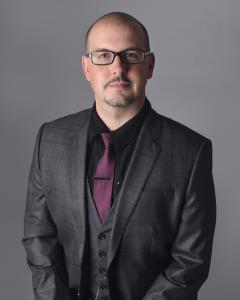 Matthew Balthrop brings to the classroom twenty years of experience in the professional media production industry, producing award winning media for some of the biggest brands in the world.  His client list includes Audi of America, Marvel Comics, Intel, and the National Institutes of Health, to name a few.  He continues to produce work as the Chief Creative Director for G14Media, a full service agency in the DMV area.

On the creative side of the industry, Mr. Balthrop's work as a director and show runner have earned him awards at film and television festivals around the country.  He co-created the television show 'The Clio Exchange', a program which showcased the positive work of minority Americans throughout history.  The show ran in syndication nationwide for a number of seasons.  Currently, he continues to oversee different projects in various stages of development.

In the classroom, Mr. Balthrop creates an environment that is an honest microcosm of the professional production world.  He encourages critical thinking and team work, pushing students to consider new ideas and techniques that will serve them not just within the production industry, but in any industry that they choose to go into.  Some of his graduates have attended the most prestigious film schools in the nation, including USC, Colombia, Syracuse, and Emerson while others have gone directly into the film industry, working on major feature films such as Avengers - 'Endgame' and the Harriet Tubman biopic 'Harriet'.